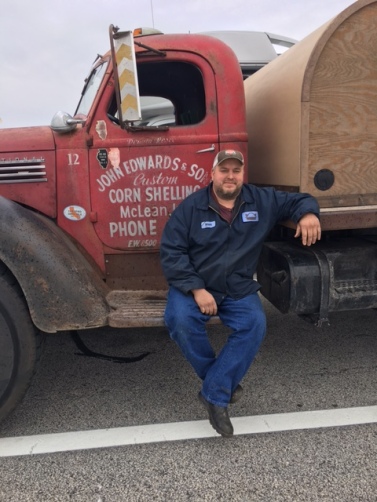 It was a raining day in May when a very different looking truck pulled through the tolls at the Cape May ferry terminal.  The cab was 1947 restored antique truck, but the back was something different. Inside, Mark McBride, admitted he wasn’t from John Edwards & Sons as the cab label indicated, but rather a dedicated mechanic from Lexington, IL who restores and custom rebuilds old trucks for people around the country.

This truck, however, was special. It was his, and was in its third year of service raising funds for St. Jude Children’s Research Hospital.  Once a year, McBride sets out across the country and challenges supporters to donate a penny for every mile he covers. His first year, he covered 3,500 miles. In 2016, he put on 6,650 miles in fourteen days travelling from California to Vegas. This year, he’s doing the Northeast corridor from Bangor, Maine to Key West, FL with the goal of close to 8,700 miles, or a desired donation of $87 for the entire journey.  Next year, he has his sights set on Alaska, and he’s sure his truck can do it.

His truck states he’s a man on a mission, but he’s part of a larger Convoy for Kid’s truck 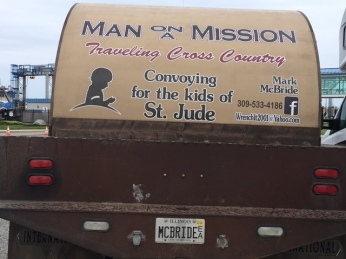 show held on Father’s Day in Mason City, Illinois to raise funds for the same St. Jude’s cause.  McBride’s cross country trek is his way of raising funds plus awareness on a broader playing field.  He tries to stay on older roads that match the age of his truck, but loves ferries so took the relatively modern Cape May-Lewes Ferry, circa 1964, to give both himself and the truck a bit of a break on the raining afternoon he cruised through Jersey.

The truck does additional service throughout the year hauling various payloads McBride books, but during his annual treks for St. Jude’s, his own custom built wooden camper goes on the back to house a small bed, kitchenette, and water stores inside. The entire camper dome comes off when the truck is in regular working mode.

To learn more about McBride’s mission, visit his Facebook site,  or write to Wrenchit2001@yahoo.com. Meanwhile look for him on the by-ways of I95 en route to Florida!